A SET OF QUESTIONS:

1. Did your artwork involve other people?

2. Are you uncomfortable with calling your artwork an artwork?

3. Would you rather discuss it as a project?

4. Did you refer to the other people involved in your project as a community?

5. Have you tried to explain at length the ways in which you are defining the terms ‘involved’
and ‘other people’ and ‘community’?

6. Are you painfully aware that there are unavoidable power imbalances at play in your project?

7. Did you document the results or process of your project using a digital SLR, a camera phone, or Instagram?

8. Are there obvious formal possibilities for exhibiting this documentation?

9. Did you wonder if it would it be inappropriate to sell this documentation?

10. Are there power struggles immediately evident when viewing this documentation?

11. Have you considered trying to present your project as a book, documentary, or play?

12. How much pressure did you feel to defend the work as tackling political change?

13. Did you assume that your project needed to continue indefinitely towards achieving some
political end in order for it to be successful?

14. Were you asked about success, measurable outcomes, attendance levels, or evidence of change?

15. Did you expect there to be answers to those questions?

16. Did your research for this project lead you to briefly attend a series of parallel community
meetings at which you felt the need to excuse a comment or thought as coming from the
perspective of an artist?

17. Did your project dissolve after a public presentation / workshop / town hall meeting / charette / or screening?

18. Did you have any unresolved guilt around its dissolution?

19. Can your project be critiqued by a painter?

20. Do you feel belittled when approached by a visual artist, theoretician, or architect?

21. Have there been discussions of ‘radical’ theory offered from a great distance to the project?

22. If your project were a math equation, would the sum always end up as a critique of capitalism?

23. Is your project illegible enough to likely never be printed in Artforum or your local newspaper?

24. Can you imagine yourself being awarded a large-scale prize some years after the launch of
your project, which you didn’t necessarily define as an art project in the first place?

25. Could your project easily be mistaken for a project found in surveys of Fluxus, Conceptual Art, or Dada?

26. Did your project align itself to a set of political goals that have already been articulated?

27. Is there form evident in the project that would allow it to most easily fit into an identified granting opportunity?

28. Could your project be mistaken for a restaurant, social service, after-school program, or a guerrilla marketing campaign?

29. Could your role in the project be defined as that of a facilitator, organizer, or teacher?

30. Were you asked to explain the reason you think your project is art?

“Outside the Citadel, Art That Nurtures” 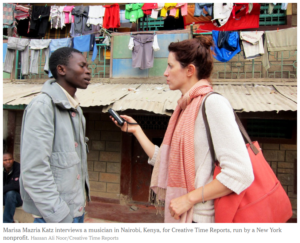